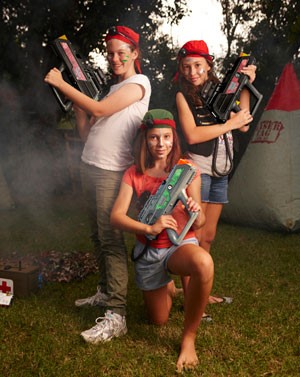 What to expect at a Tom’s Laser Tag party?

We typically arrive fifteen minutes prior to your party start time. We will introduce ourselves and survey the “battlefield” typically your entire yard.

We place two flags as starting points for the players. The best location for the “graveyard” is determined, usually the patio, deck or garage of the home and this is where the host should have refreshments for the player while they wait between games.. We use hazard tape to cordon off areas that are deemed unsuitable or unsafe for game-play. We prepare flag ribbon to identify the teams.

At the appointed party starting time we have a briefing on how the laser tag phasers work, safety rules, boundaries of the battlefield, objectives of the first game and questions from the players. The two teams are chosen, players get an identifying color team ribbon. The players are then issued laser tag phasers and sent to their flag/starting point for that game. The players wait at their flag, the starting whistle is blown and they attack each other.

When a player is “tagged” on one of their sensors by an opposing player the phaser registers the hit on its display screen and the speaker gives an audible sound so the player knows he has been hit. The phasers do provide feedback indicating if they tagged the opponent. Most games are team based; players win or lose as a team. When a player has been hit the predetermined number of times their phaser is disabled. The speaker emits a short scream letting the player know he has been eliminated. The player then goes to the graveyard to wait for the next game. Typically the wait between games is short.

When one team has won that game we have a short mission briefing at the graveyard. If the game changes, new instructions are given. The players are sent to their flags to be reactivated. We alternate the teams on the  flags so that if there is an advantage to one side of the field, both teams share that opportunity. Once all the players guns have been reset, the whistle is blown and the process repeats.

The average number of games in a two hour period is six but variables alter that number up or down. No two parties are ever the same. At the end of the laser tag session the players turn in their phasers, have refreshments and talk about the good time they just had.

So what does this great party cost?

All pricing and availability is found at our Squareup.com PCI Compliant data encryption secured appointment calendar. The party cost varies by location and by quantity of toys used. Tom will also happily take your call for questions although he will still send you to the scheduling website to help avoid any scheduling errors and enable the other features of our appointment calendar..